We had not seen our daughter since she made the move back to Brooklyn. Her two year stint in London having ended when a new opportunity was offered from her current company back in the Big Apple. I was ecstatic that she was “home.”  With home being a four hour drive versus a seven hour plane ride.

We invited ourselves up to see her new apartment and to bring her some of her things that she had stored in our basement. This prompted her to have an overdue housewarming/ holiday party which started off the Christmas season nicely.

We arrived early in New York, trying to beat the traffic which was helpful because we realized upon entering Pennsylvania that we had forgotten our EZ pass. The EZ pass is essential when traveling the Mid-Atlantic States with their notorious toll roads.

Arriving at our hotel, The Fairfield Inn & Suites Brooklyn, which we had booked on a mix of points and cash, we were pretty impressed with the warm and friendly greeting from the front desk clerk. The room was a fair size for New York and they had all of the amenities that we needed for our short stay; including free hot breakfast, a gym, and parking. Albeit, parking for an additional $35 per night in a very limited parking area.

There is also an excellent rooftop terrace at this hotel that offers sweeping views of the borough that I am sure gets much use during warmer months.

After getting settled we headed out to see my daughter. Our trip wasn’t very long, although the traffic makes it longer then you would expect even though the hotel is only two miles from her apartment. As we inched along we passed by the interesting visage of the controversial Barclay Center, a massive structure completed in 2012 that is home to the Brooklyn Nets and the New York Islanders. The complex is also used for concerts and conventions.

CROSS TIP: If you ever find yourself attending an event at the Barclay Center, note that they do not have any dedicated parking, which is unusual for an urban venue, instead they encourage the use of public transportation and have made it easily accessible via the Long Island Railroad, and the NYC subway.

Arriving at our daughter’s home, we were pretty pleased to see that it was in a brand new secure building. ​While Mike schlepped up all of her items from the car, I got a chance to visit with my grandbird, Howard, who may not have been as happy to see me as I was to see him.

​Once daughter was reunited with her possessions, we found ourselves starving and decided to eat at a restaurant a short hop from her apartment. It was cold and too far to walk so we jumped into the car and drove to the Gowanus section of Brooklyn.

Side Note: Most of you are aware that the greater metropolitan area of New York City is actually made up of five different Boroughs; Manhattan-Bronx-Queens-Brooklyn-Staten Island. Which are situated within these counties of New York: Bronx, Kings, Queens, And Richmond respectively.

​But did you know that each Borough is also broken down by neighborhood? A few of the more famous ones being Chelsea, SoHo, Chinatown, Williamsburg, Astoria etc…,as well as, the one we were eating in, Gowanus, which was named for the canal that runs through it.

The first restaurant that we tried to dine at was taking reservations only so we walked across the street and entered Runner & Stone, a quaint bar and restaurant founded by a Chef and a Baker on Third Avenue in Brooklyn. They too were only seating reservations (Note to self, make reservations when in town next time) but they were able to accommodate us at the bar. It was too cold to continue to look for restaurants with table seating so we perched ourselves at the high top and settled in.

​We were not disappointed, from the Swabian Pretzel appetizer all the way through to the S’mores inspired dessert, we were completely intoxicated with the food and impressed with the skills of the bartender. It was a great introduction to the new neighborhood that our daughter moved into.

After leaving Runner & Stone, one of our daughter’s friends caught up with us and we all went for drinks at a place a few doors down from the restaurant. But we parents were tired from the long drive so we didn’t linger long.

After a relatively decent night’s sleep we caught up with daughter the next day and went for brunch at Camperdown Elm, a restaurant housed on 7th Avenue in the neighborhood of Prospect Park.

It was gloriously noisy and bright and full of gregarious Brooklynites enjoying a mild, late fall day. The charming server was extremely patient as I named off several drinks that were not available, (Note to self: no one serves ice tea in Park Slope), so I settled on good old fashion NYC tap water as we ordered our brunch.

We left very little untried from the brunch menu. With my favorite being the ham and strawberry jam Johnny cakes, and Mike’s being the Bloody Mary. We all savored the deviled eggs and rounded off our meals with donuts drizzled in a Hazelnut Praline. After such a satisfying, and all together, very filling meal, we decided to explore the neighborhood a bit on foot. ​

While Mike moved the car from the 1-hour parking only zone, daughter and I strolled up to the Park Slope Armory YMCA building. This massive structure was completed in 1863 to house the 14th Regiment of the New York State Militia. The building, a designated New York City landmark that is listed on the National Register of Historic Places, is currently used to serve the public as part of Brooklyn’s YMCA recreation complex. 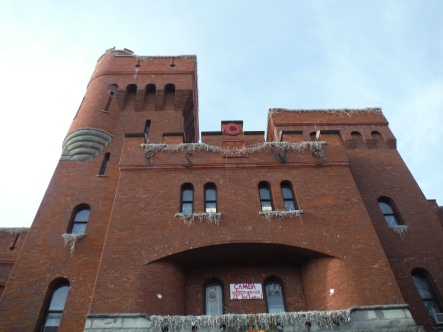 ​Once Mike joined us we were ready to explore. ​Park Slope is generally known by three distinct divisions: North Slope, Center Slope and South Slope. The area is bordered by the massive beauty of Prospect Park, which was designed by Frederick Law Olmsted and Calvert Vaux. The area has a very long history, with it first inhabited by the Lenape people, an indigenous tribe of the Northeastern Woodlands. The first European settlers to the area were the Dutch around 1660.

By the end of the 1800’s wealthy city dwellers rushed to build stately mansions on the peaceful avenues that surrounded the park. These incredible homes are lovingly tended to to this day and I would encourage you to walk or drive the area to view them.

For other interesting facts about Park Slope, (Including the pivotal role of a small but powerful troop of Marylanders during the Revolutionary War) here is an excellent website full of great facts about the neighborhood.

It was getting a little cold so we hiked back to the car and on the way back toward our daughter’s neighborhood we veered off onto Ocean Parkway and took a twenty minute drive to see Coney Island. Having never been there in all my years of visiting the NYC area, I vowed to return in the summertime to walk the boardwalk and to eat one of Nathan’s famous dogs.

​The afternoon light was quickly receding and we knew we needed to drop our daughter back at her apartment so that she could prepare for her party later in the evening, and we needed  to return to the hotel to change into our ugly holiday sweaters.

The party was a success and we thoroughly enjoyed ourselves with her brilliant group of friends and felt that it was a wonderful way to kick off the holiday season, especially since we set a pudding on fire in true British fashion.

Prior to checking out of the hotel and meeting our daughter for our traditional Sunday goodbye brunch, Mike and I set out on foot to find a coffee shop near the Fairfield Inn.

Just around the corner from the hotel we passed De Martino’s Wholesale Fish Market, where I met this beautiful specimen all gussied up for the holidays.

Right next door we did discover Ninth Street Espresso-Gowanus, a sweet coffee shop housed in a complex which includes Three’s Brewing Brewery, The Shop @Three’s, and The Meat Hook. This establishment is now a destination on our list to visit next time, especially since our daughter, who has patronized the brewery, has confirmed that it is a place worth visiting.

So with steaming coffee in hand we continued our stroll around the block and as we were nearing the hotel I saw a closed storefront and nonchalantly snapped a few pictures of the unique entrance not really sure what secrets it held inside.

Later, after returning home, I was watching episode 6 of season 2 of “Ride, with Norman Reedus“ (Daryl of Walking Dead fame) and lo and behold there he was at the very same Brooklyn storefront, Vax Moto. Where apparently you can buy a taco and/or a motorcycle.

​Seeing Norman at this place, in this episode, caused Mike and I to laugh out loud. In the previous episode (5, season 2) of Ride, Norman was on the Big Island of Hawai’i and stopped in at Suisan Fish Market in Hilo for some poke just as we had a few weeks prior.

Back-to-back episodes of Norman Reedus filming at the same places we were made us imagine that he was following us!

Back at the hotel we packed our gear, loaded the car, and drove to daughter’s apartment. Surprisingly, she met us on time, maybe feeling a little tired since the last party guest did not leave until after 2:00 am, but if she was, she didn’t let on.

Brunch was a short walk from her apartment and was located in the Bedford-Stuyvesant (Or Bed-Stuy for short) neighborhood of Brooklyn. A neighborhood renowned for its historic brownstones and vibrant culture, we pledged that we would explore more of the area during our next visit.

​Ducking in out of the cold, we dined at Alice’s Arbor, a charming place that serves authentic American farm-to-table cuisine. With a long stretch of highway looming in our future, husband and I splurged on our diets and dined on their gorgeous and perfectly cooked Certified Angus Burger. Indulging ourselves with their Cowboy fries-made with smoked paprika and a touch of chili powder, while daughter woke herself up with a more traditional brunch choice of a mushroom and goat cheese omelette.

Well fortified for our travel home, we hugged our daughter goodbye, knowing that we would see her in just a few weeks when she joined us for a family Christmas at home with her brothers.

This site uses Akismet to reduce spam. Learn how your comment data is processed.